2018 International Guideline on the Diagnosis and Management of PCOS

All of the links below pertaining to the 2018 International Evidence Based Guideline for the Diagnosis and Management of PCOS are endorsed by the AE-PCOS Society.

Patient Information Sheets
These infographics were created as part of the 2018 International Guideline on PCOS. Please click on each image to learn more: 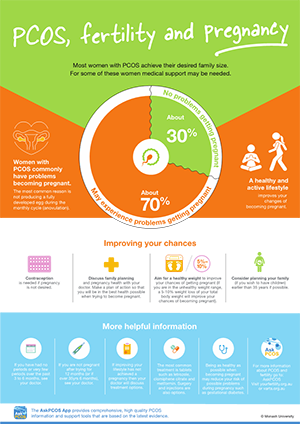 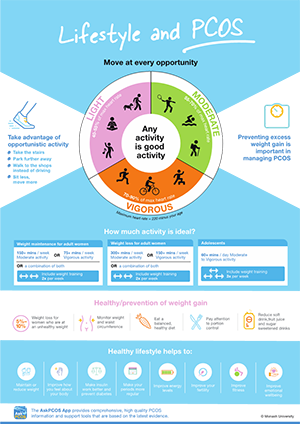 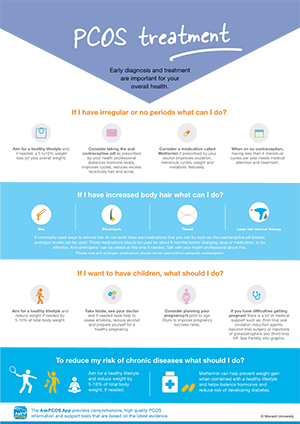 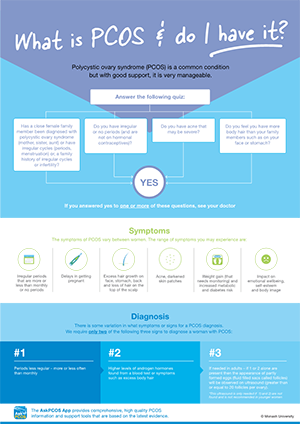 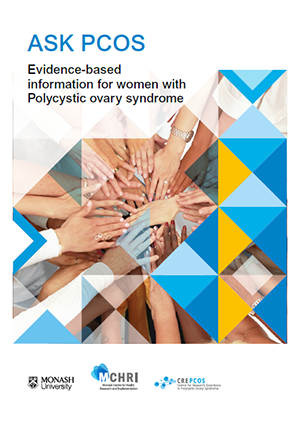 Similar to the infographics above, this information booklet is in easy to read, consumer friendly format. It is based on the best available evidence and written by leading experts. 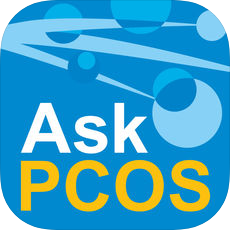 AskPCOS App is developed by experts, based on the best available evidence and co-designed by women with PCOS. AskPCOS is for women and girls who think they may have PCOS, those who already have a diagnosis, and for those supporting women with PCOS.

AskPCOS has a range of innovative features including:
- A self-diagnostic quiz
- Easy to understand information on PCOS
- A range of info-graphics
- Videos by experts
- A question prompt list to assist you when talking to health professionals
AskPCOS is essential for women wanting the best available information about PCOS.

Available from the App Store. 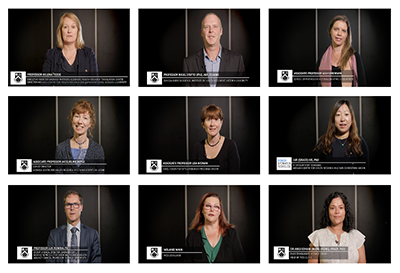 Leading health professionals, academics and women with PCOS talk about the importance of the Guideline.

The terms Polycystic Ovary Syndrome (PCOS) and Polycystic Ovarian Disease (PCOD) are commonly used interchangeably. We prefer to use the term Polycystic Ovary Syndrome (PCOS) because the signs and symptoms of this condition vary, and not all women with PCOS will necessarily have all the signs and symptoms. "Syndrome" is the favored term because it alludes to the presence of varied signs and symptoms and does not imply a precise cause of the condition, as the exact cause of PCOS has yet to be determined. This definition is in contrast to that of a "disease" where there is typically a specific cause for the condition. PCOS was earlier called "Stein-Leventhal Syndrome" which is a term currently not used.

How do you make the diagnosis of Polycystic Ovarian Syndrome?

In order for your doctor to make the diagnosis of PCOS, he/she will have to obtain a detailed medical and gynecological history. In addition, your physician will need to perform a physical examination, which includes clinical examination for symptoms of androgen excess, laboratory tests and an ultrasound of the pelvis.

The current criteria for the diagnosis of PCOS include the following items:
1. Signs of excess androgens (male hormones) in the form of excess hair growth or blood tests that show elevated levels of androgens
plus
2. Irregular or absent periods or polycystic ovaries on ultrasound.
There is also the need to confirm the lack of any other conditions that would explain the above signs and symptoms, since problems with other endocrine glands can cause similar symptoms.

People have told me that PCOS is only a problem to worry about when I want to get pregnant. Is this true?

No, this is not true. Although it is true that PCOS can cause difficulty getting pregnant, its effects go far beyond fertility. A few good examples of these effects include hirsutism (hair growth), insulin resistance, heart disease risk factors, and even uterine cancer. This list is far from complete, but in reviewing a few examples you may gain some idea of the importance of seeking treatment for PCOS long before you desire pregnancy.

Hirsutism is the excess growth of coarse dark hair in a predominantly male pattern. Women affected by PCOS commonly experience hirsutism due to increased levels of the male hormones called androgens. The longer a women with PCOS goes untreated the more severe her hirsutism will become.

Insulin resistance is a condition common to PCOS in which the tissues of the body become less responsive to the hormone insulin. If left untreated, the body may become so unresponsive to insulin as to develop a type of diabetes. If diagnosed appropriately, there are treatments available which can prevent the progression to diabetes.

Heart disease risk factors are more common in women with PCOS. Women affected by PCOS are frequently overweight, have increased levels of androgens, and may have insulin resistance, elevated cholesterol, and high blood pressure. With proper attention these risk factors can be treated, however, if left untreated they can increase the woman's risk of heart disease.

Women with PCOS can often go great lengths of time without a menstrual period. When this occurs the inside lining of their uterus, called the endometrium, is exposed to the hormone estrogen for long periods of time 'without a break'. This can lead to a condition of disorganized cell growth within the endometrium. If left untreated this disorganized cell growth can develop into cancer of the uterus. With appropriate medical treatment this can be prevented in almost all cases. Having said this, it is very important that we stress that it is not the period itself that prevents endometrial cancer. Rather, it is exposure of the uterine lining to the hormone progesterone - which is commonly lacking in women with PCOS. Appropriate treatment to prevent uterine cancer will include a progesterone-like medication.

I have heard about a medication called Glucophage, how does it work, and is it safe?

Glucophage, the brand name for metformin, is a medication that is designed to treat people with type II diabetes. There are many brands of metformin available. Metformin works in two ways. Firstly, it decreases glucose (sugar) production in the liver, and secondly, it increases the sensitivity of body tissues to the hormone insulin. In this way, the body is able to maintain a more normal sugar level with lower insulin levels.

For the woman with PCOS who has insulin resistance, higher insulin levels are required to maintain blood sugar levels. Elevated insulin levels in the blood have negative effects that can lead to diabetes. Metformin can help maintain a lower blood sugar level with less insulin. Hence, there is less insulin available to induce the negative effects of elevated insulin levels. This has been shown to translate into weight loss, lower androgen levels, and even increased ovulation in some women.

Metformin is generally a safe medication, although some side effects may occur. The majority of these side effects are minor and improve with continued use of the medication. The most common side effects are nausea, diarrhea, and stomach upset. This can be improved by taking metformin with meals. Metformin has been associated with one very rare and possibly serious side effect called "lactic acidosis". This condition occurs most commonly in people with kidney problems, and has been seen in approximately 1 in 33,000 people. If you know that you have kidney or liver problems make sure your doctor is aware of this before you begin taking metformin.

Metformin has been taken in pregnancy without an increased risk to the fetus, although long-term information is not yet available. If you do become pregnant while taking metformin, stop the medication and see your physician who will advise you further on any need to take metformin during pregnancy. Available data would suggest that using the medication in early pregnancy should not be expected to cause problems for the baby.

Does PCOS ever go away, and is there a cure?

At this time there is no cure for PCOS. However, with proper treatment many of the symptoms can be controlled and possibly even eliminated. With appropriate treatment hirsutism, acne, irregular periods, weight gain, and infertility all can be treated. Although there is no cure, all women with PCOS should seek the care of a physician to optimize their health and prevent progression of symptoms and their ill effects.

Women with PCOS are commonly bothered by very irregular menstrual periods. Often, women report they would rather have regular and predictable cycles rather than the random episodes of heavy bleeding they are experiencing. On the other hand, we frequently hear women say they prefer not having a period every month, and would rather not be bothered by regular cyclic bleeding. Whatever your preference, this is a personal choice for each woman to make, and your physician can help you obtain your goals.

Thus, in order to protect the endometrium from the effects of prolonged estrogen exposure we need to provide progesterone in some way. For most women, this is easily done using the oral contraceptive pill. The pill, when used in this way, can provide several benefits at the same time. First, the pill contains a progesterone-like compound that will protect the endometrium from the cell changes mentioned earlier. Second, the pill will provide women with a regular and predictable menstrual cycle. Third, for women who do not want to become pregnant, the pill provides reliable contraception.

Although the oral contraceptive pill is the most commonly used medication, it is important to understand that it may not be for everyone. Some women cannot tolerate the pill and for these women taking a progesterone-like medication for approximately two weeks each month can protect the endometrium. This will produce a regular and predictable menses. However, it will not provide contraception. For the woman who does not want to experience regular cycles, but needs to have her endometrium protected from the continuous estrogen, there are ways to provide the needed progesterone without causing a monthly period. Obviously, for women who desire pregnancy, oral contraceptive pills are not ideal. For these women, medications are available to induce ovulation. With ovulation there is production of the progesterone that is needed to protect the endometrium.

Overall, it is necessary for women with PCOS to receive some type of hormone therapy to provide progesterone in order to protect their endometrium. The oral contraceptive pill is the most common means of providing this hormone replacement, however, it is not the only option. Your doctor will be able to provide you with the medication that best fits your personal goals.

I have noticed a discoloration around my neck. Is this anything to be concerned about?

I have been told I have PCOS. Will I be able to get pregnant?

A diagnosis of PCOS suggests that you are likely to have some difficulty becoming pregnant. However, with help from you doctor, pregnancy should be an option for almost everyone with PCOS. Women with PCOS generally have irregular, infrequent, or even absent ovulation. Without ovulation there is no egg that is available for fertilization. Also, due to the abnormal hormone levels, the endometrium, or inside lining of the uterus, does not develop normally in women with PCOS. Therefore, even if a rare ovulation was to occur and the egg was fertilized, the endometrium may not be properly developed to allow for the attachment and growth of the embryo. This may explain the increased risk of miscarriage in women with PCOS.

Your doctor can provide you with medications that can help you ovulate, in a process called ovulation induction. Common ovulation induction agents include clomiphene citrate (brand names include Serophene, Clomid) and human menotropins or gonadotropins (brand names include Pergonal, Humegon, Repronex, Follistim, Gonal-F). Insulin sensitizers such as metformin can also be used to improve the likelihood of ovulation. If ovulation induction alone is not successful in producing a normal pregnancy, then the use of the assisted reproductive technologies (ART) - such as in vitro fertilization, can be attempted.

These links are provided for informational purposes and do not replace clinical recommendations from your healthcare providers. They do not reflect an endorsement by the AE-PCOS Society.